‘The city of Sophronia is made up of two half-cities. In one there is the great roller coaster with its steep humps, the carousel with its chain spokes, the Ferris wheel of spinning cages, the death-ride with crouching motorcyclists, the big top with the clump of trapezes hanging in the middle. The other half-city is of stone and marble and cement, with the bank, the factories, the palaces, the slaughterhouse, the school, and all the rest. One of the half-cities is permanent, the other is temporary, and when the period of its sojourn is over, they uproot it, dismantle it, and take it off, transplanting it to the vacant lots of another half-city.
And so every year the day comes when the workmen remove the marble pediments, lower the stone walls, the cement pylons, take down the Ministry, the monument, the docks, the petroleum refinery, the hospital, load them on trailers, to follow from stand to stand their annual itinerary. Here remains the half-Sophronia of the shooting-galleries and the carousels, the shout suspended from the cart of 63 the headlong roller coaster, and it begins to count the months, the days it must wait before the caravan returns and a complete life can begin again.’
( Invisible Cities, Italo Calvino 1997, p.55)

#1. Massive materiality
Taking Calvino’s image of Sophronia as point of departure, we question the idea of what is temporary in the city. This questions recalls others, such as who the public of these temporary projects is, and what its use and its materiality are.
The competition brief asks for temporary projects that should be meanwhile interventions that cover a time span until future development occurs, assuming the ‘permanent’ as the final goal of the urban.
Our project confronts this same understanding of the urban as we think that it could easily repeat and reproduce the strategies that led us to the financial crisis. We question the current neoliberal conception of the temporary, namely, a positivist approach that considers always the city as an efficient and productive machine.
In turn, our proposal seeks to literally revert this concept of the temporary by building a concrete structure with massive proportions. This architectural piece is meant to look permanent at first sight; however, it is in all respects a temporary space. It does not keep in place for long periods of time. It will be transported, moved, displaced; yet not without difficulties.

#2 Moving
Moving the piece from one site to the next one will entail taking into consideration conflicts along the path, issues that will determine the dimensions and the shape of the piece taken to its limits. Its width, height, length and weight are decided in relation to the path and the elements that move the piece around the city. 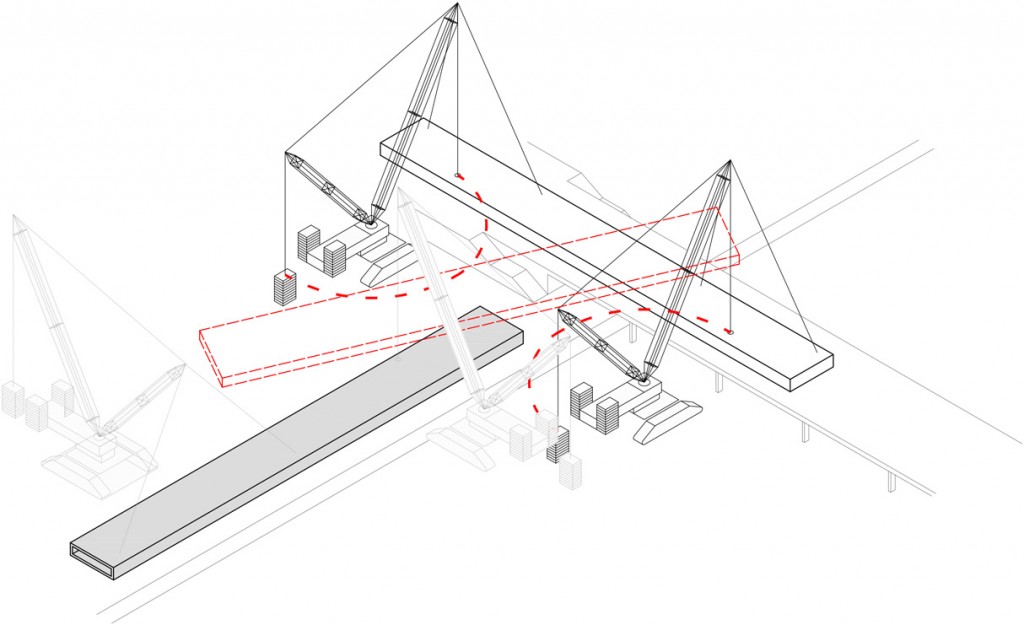 #3 Publics
By taking into account these issues, ‘publics’ will spontaneously emerge. We understand ‘a’ public as a ‘set of actors jointly affected by a problem [..] who organize into a public to ensure that the problem is addressed’ (Dewey 1929). Issues, as Marres says, ‘spark publics into being’ (Marres 2010). Namely, difficulties encountered along the path will call a multiplicity of affected actors to engage with a public issue.
Around those publics, events and parties will be organised and actors – including among others cranes, trucks, people, birds and helicopters – will be bundled.

#4 Sites and agonism
In each project site, the piece is positioned in order to be used by different publics. The space won’t be that easy to use. It will be to low to stand – yet enough for kids-, not long enough to connect the river’s shores, too long and narrow to be walked through, or too high to be climbed. By being difficult to be used, the piece will also include usually excluded actors – kids, trees and birds, among others.
The piece is an ‘agonistic’ (Mouffe 2005) space that evidences multiplicity and heterogeneity. It is an architectonic artefact that calls for the formation of alternative public space.