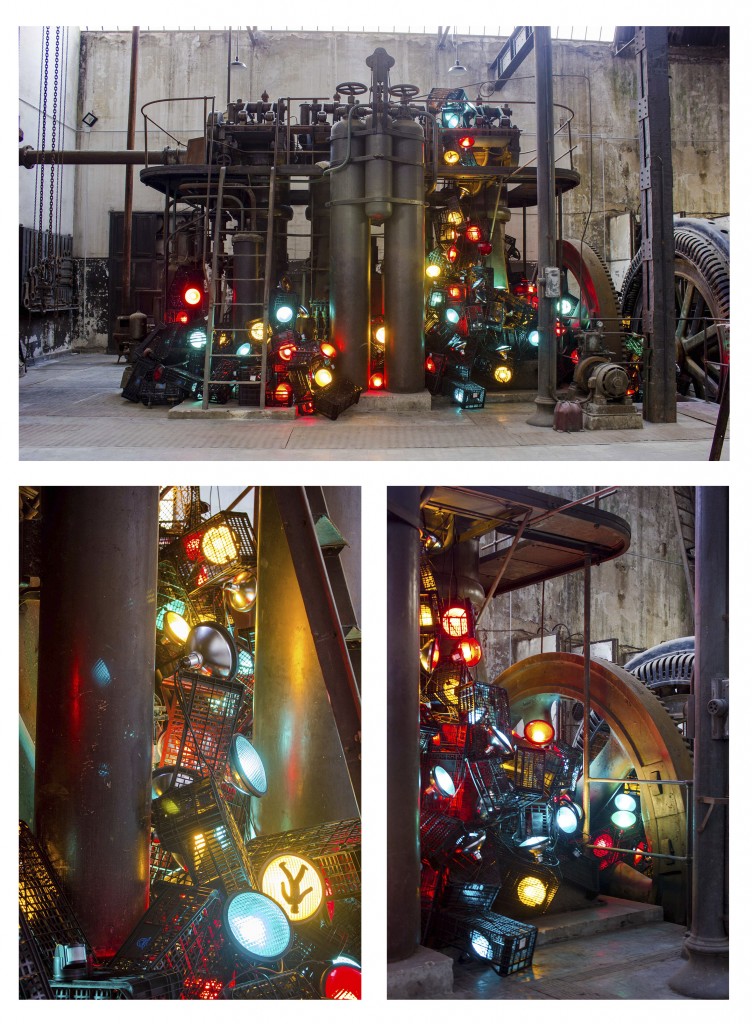 Last september a beautiful process concluded with the exibition of G109 in La Neomudejar de Atocha. Text below:

“The wealth of societies in which the capitalist mode of production dominates presents itself as an immense accumulation of waste. Indeed, no other previous or foreign society has produced waste in the quantity, quality and speed comparable to ours. […]
We have learned to view waste as a sign of luxury.” 1

In this context, the work is presented as an object of desire as well as waste accumulation. Almost all of the materials on show have been recovered and removed from their natural cycle through tracking and tracing, recovering marginal forms of production. The light from the piled up traffic lights awakens, treasure like, feelings of fascination in viewers. This sensation is enhanced thanks to motion sensors connected to their circuits, emitting light signals no apparent order. The mystery, the extravagance and magnetism of the piece contrast violently with the origin of the materials used.

The material used to convey meaning is the waste generated during the process of modernization of public lighting systems in Madrid. The urban language is re-introduced and redefined to establish new relationships with individuals.

The device is constituted as an assemblage activated so that its parts work again through the incorporation of electrical circuits. This works wants to highlight the pact established between citizens and institutions for the orderly conduct in public spaces. The almost arbitrary way in which the traffic lights run present a contradiction with their own rhythm as signifiers in the environment.

Bourriaud, in his description of art as social interaction, presents open spaces, whose rhythms are opposed to that of everyday life, favoring different human exchanges to those already established in conventional ‘communication zones’. The current social context creates specific and predetermined spaces that limit the possibilities of human exchange. The invention of the traffic light, as a tool for urban organization, effectively aborts any form of relationship outside those regulated by them. The mechanization of social codes gradually reduces the scope of human relationships.

The artwork, according to Bourriaud, is based on proximity, the encounter between the observer and the sculpture, the collective elaboration of meaning. The work is interpreted as a succession of states of meeting, of situations newly presented in which a bidirectional relationship between viewers and the actions and reactions established by those situations. The very act of moving within a constructed space makes up the art work, and so spectators cooperation is needed for the actualization of the work.

Signs are parasitically distributed around the Room as an electronic being. A cybernetic organism plucked out of a dystopian world that engulfs the whole environment.